This past weekend, hubby and I went out to Jekyll Island for the 8th annual Shrimp and Grits Festival. It was held on the grounds of the historic Jekyll Island Club Hotel. This Club is where the Vanderbilts, the Rockefellers and their friends came to play during the turn of the century, also known as the height of the Gilded Age. The first transcontinental telephone call was originated there. And a secret meeting was held there in 1907 to resolve a nationwide economic panic. That result of that meeting was the foundation of the country’s Federal Reserve system.

I was impressed with how well organized the event was. The smooth shuttle service between the event parking (on the island’s airport runway) and the Hotel was an unexpected surprise. The food selections were delicious. My favorite was the BBQ Shrimp & Grits bowl from The Half Shell on The Pier restaurant. Think chili powder seasoned shrimp on a bed of sautéed peppers, tasso ham and creamy stone ground grits. But you all didn’t come here to read about our eating adventures, so let’s get to the historical stuff.

(Note: if you do want to read more about our eating adventures, check out http://teamtyson.wordpress.com for a dish-by-dish account of our Georgia-to-Montreal road trip last year.)

As we were getting ready to leave the Festival, my husband asked if I wanted to look for the slave ship site again. In 1858, one of the last known shiploads of “imported” Africans had unloaded in secret on Jekyll Island. This landing was illegal as the importation of Africans into the United States had been banned in 1808. We had tried unsuccessfully to locate this spot on our previous visits. But this time we were successful. 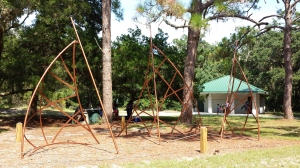 The landing site is located within what is now known as the St. Andrew’s Picnic Area. (Be warned, this place was crawling with what looks like conjoined lightning bugs. They swarm your car as soon as you stop to park. They seem to especially have a thing for white cars. They don’t bite, but they are annoying.) There is a memorial structure commemorating the landing with 3 markers that detail the story of the Wanderer, what happened to the 407 Africans who survived the trip, and the fate of those who orchestrated the illegal shipment. I was not happy to find out that I had been admiring the house of the man behind this whole event a mere 20 minutes before.

There is a similar historical site on neighboring St. Simon’s Island. Igbo Landing is where a shipment of enslaved Ibo tribesmen, native to Nigeria, came ashore in 1803 after being purchased in Savannah to the north. However, the locals say that the Ibo stepped ashore and then marched into the water with the intent of walking back to Africa. Some say they all wound up drowning. Others say that rose up in the air and flew back home. However, this particular landmark is inaccessible as the site is now in the backyard of a private home in a gated subdivision.

African-American Women’s History in the Area

Susie King Taylor was born along the Georgia sea coast. She later became a nurse during the Civil War in the Savannah and Hilton Head area. You can read about her life in the area and her wartime adventures in her autobiography Reminiscences of My Life in Camp with the 33d United States Colored Troops, Late 1st S.C. Volunteers. Her two marriages are mentioned in passing. Literally, a sentence is dedicated to each husband within the entire text. Someone needs to read fill in the gaps with a nice historical romance story.

More information on The Wanderer and the last shipload of enslaved Africans to arrive in the United States: http://www.goldenisles.com/african-american-heritage/wanderer

More on African-American historical landmarks in the area: http://goldenislesnews.blogspot.com/2011/02/african-american-heritage-in-brunswick.html