In case you didn’t know, Beverly Jenkins is known as “the premiere writer of African-American Historical Romance.” And her next release Destiny’s Surrender is coming out on September 24. That’s in 4 weeks. Squee!

Since the release date is so close, I wanted to reminiscence on my favorite Beverly Jenkins historical romance novels. Notice I said “novels” plural because there is no way that I could ever pick just one. There are two that standout as near and dear to my heart: Topaz and Night Hawk. Why these two? Dixon Wildhorse and Ian “Preacher” Vance. <intentional, dramatic pause> Ooh-wee! They might be the best-est-est heroes ever.

The “cute meet” in both of these books are what grabbed me. But, there’s nothing cute about how these men first meet their heroines. However, both of those scenes had everything to do with hawt and sexy. Don’t worry, I’m not going to give away what happened in either of these scenes. I wouldn’t want to ruin it for any of you Beverly Jenkins virgins out there. But, I know all you die-hard Beverly Jenkins veterans KNOW what I’m talking about. <brushing the dust off my shoulders Dixon Wildhorse-style>

The genius of how these heroes were introduced and crafted goes back to my post about African-American heroes from a few weeks ago. These men are shown as protective, authoritative and holding their own during a racial tense time. Both stories are post-Reconstruction era Westerns. You have to remember that this time was known as “Redemption” in the former Confederate states. It was not an easy time for African-Americans to exert their fairly new rights and to establish themselves to post-slavery life.

But anyway, back to the romance. I’d love to hear from others about their favorite Beverly Jenkins novels, heroes and heroines. Go! 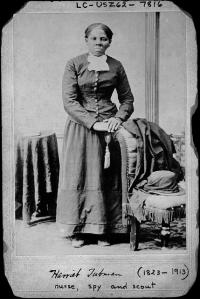 Last week, Russell Simmons posted a link to a “comedy” sketch about an alleged Harriet Tubman sex tape. It was implied that Ms. Tubman intended to use this tape as a way to blackmail her master into setting her free. Personally, I felt a deep sense of disappointment and betrayal while I watched the video. I later thought reflected on what Harriet Tubman had accomplished and sacrificed in her life as an African-American women in the United States during the 19th century. That reflection, on the heels of watching the video, quite frankly pissed me off. But I’m not going to use this space to go off on a rant. I’m going to present you with the facts of her life and let you, the reader, make your own judgment.

Early Life
Araminta “Harriet” Ross Tubman Davis was born enslaved in Maryland in either 1819 or 1820. Her maternal grandmother Modesty was born in Africa and is said to have been of Ashanti descent (a tribal group that can still be found in modern day Ghana). Her mother Harriet, also known as “Rit”, once threatened to split open the heads of her master and a slave trader if they tried to sell off her children. This event is said to have influenced Araminta’s, or “Minty’s” belief in that resistance to slavery was possible.

As a teenager, an overseer demanded that Araminta help restrain another slave who was about to be punished. When she refused, the slave got away and the overseer threw a heavy metal object at the retreating man’s direction. The overseer missed his target. The object hit Araminta in the head instead, almost crushing her skull. As a result, she suffered from seizures and blackouts for the rest of her life.

“Moses”
Araminta married free black John Tubman in 1844. It was during this time that she adopted her mother’s name and became Harriet Tubman. Even though she was married to a free man, Harriet was still her master’s property. In 1849, Harriet heard talk that she and some other slaves were to be sold. Her husband wasn’t willing to leave Maryland, so she left John behind and ran away toward freedom with two of her brothers.

Along the way, her brothers became frightened and went back to the plantation. But Harriet kept on trekking until she reached the free state of Pennsylvania. There she found work in Philadelphia and began plotting to go back to Maryland to help free the rest of her family. Ultimately, Harriet Tubman went back South, at her own risk of being re-enslaved, between thirteen and nineteen times. It is unknown how many people she actually led to freedom. Estimates range from 50 to 300 people, including most of her family. She was a conductor on the Underground Railroad for eight years and was never captured nor did she ever lose a “passenger.”

Harriet did go back for her husband but he had re-married by then and was not interested in moving north to a free state.

(Note: the “Sex Tape” video was set in 1851. Had the creators bothered to have done their homework, they would have known that Harriet Tubman was in Philadelphia at that time. There would have been no reason to blackmail Master for her freedom. She was already free.)

Civil War
During the Civil War, Harriet Tubman initially served as a nurse in the Hilton Head, South Carolina area. It wasn’t long before she was out scouting with the Union Army, drawing on her Underground Railroad knowledge of how to remain undetected as they mapped the area. She was also able to provide information that led to the Union capture of Jacksonville, Florida. She also led the 1863 Union raid around Confederate mines and across the Combahee River in South Carolina. She continued to serve as a scout and a nurse for the remainder of the war. On her way home to Auburn, New York after the war ended, Harriet’s arm was broken as she was forced from the passenger car on the train into the smoking car.

After the Civil War
Harriet Tubman spent the remainder of her life taking odd jobs so she could care for her elderly parents. She teetered into poverty more often than not, in part due to the government’s delay in honoring her soldier’s pension claims. She authorized the publication of her biography as a way to raise funds. She also made ends meet by lecturing on women’s suffrage.

She did acquire a bit of property in Auburn, New York. She set aside some of it to create a home for aged and indigent “colored people.” Harriet Tubman died of pneumonia in 1913 surrounded by family and friends.

Honors
Honors bestowed upon Harriet Tubman include: burial with military honors; a World War II Liberty ship was named after her, the SS Harriet Tubman; a 1978 United States postage stamp; and commemoration every July 20th in the Episcopal Church.

Summary
Please note that I have left out the details of many of Harriet Tubman’s accomplishments. My intent here is to give an introduction to the woman and why how she was portrayedl in the “Sex Tape” video was such an insult. This woman was such a badass in a time when most women, whether African-American or not, had little say in their everyday lives or what could or could not be done to their bodies. To see her reduced to a woman who schemed on her back to become what she was left me speechless. I really did feel like it was a slap in the face of her bravery and sacrifice. Harriet Tubman was never a sexual manipulator. She was a real life American heroine.

Given the theme of this blog, I will add that Harriet Tubman also experienced romance later in life, marrying a man 22 years her junior. (Take that Janie and Tea Cake!)

Scandalous Books, an Entangled Publishing imprint, invites you to participate in a unique anthology opportunity using a book cover as a writing prompt. Who is the woman in the picture? What is her story? You tell us. We’ll choose four stories that entertain us the most. They need to be romance, they need to happen in the early 20th Century, they need to be 20-25k, and they need to be submitted by February 15, 2014. The rest is up to you. We are open to any heat level and any tone. Let your imagination take you someplace fun, intriguing, and most especially…scandalous.

Please submit to: https://entangledpublishing.submittable.com/submit/19013 and put Who’s That Girl in the ATTN: box.

Disclaimer: Yes, Kianna Alexander is my friend in real life. Yes, I paid for my copy of this book. No, I’m not afraid to write an honest opinion of this book.

Folks, we have a new African-American historical romance novella hot off the electronic presses. 1849 pre-Civil War setting. A hottie doctor for a hero and a runaway slave heroine. And, published by Ellora’s Cave. Ooh-wee!

Freedom’s Embrace is not Kianna Alexander’s first published title. She has 6 self-published titles out, 2 of which are also historical romance (the sweet novellas Kissing The Captain and The Preacher’s Paramour). This one is still a little different. In Freedom’s Embrace, my girl – FINALLY! – gives us a peek behind the bedroom door. I have been harassing emailing this poor woman for the last year demanding to know when she was going to give me my “good parts.” Well, here they are at last.

I love that this story touches on colorism, the tension between runaway slaves and free people of color, and the threat that the Fugitive Laws posed to all African-Americans north of the Mason-Dixon line. I do wish that Kianna had played more with her hero’s ability to “pass” – when a person of color’s skin is light enough to be mistaken for a Caucasian. I think that would have cleared up the confusion I had about the hero Jonathan’s appearance. We are told that he sometimes “passes” when it is convenient but then he is later described as having a caramel complexion.

I loved our heroine Naomi’s spirit. I couldn’t help but admire her bravery. Thank you, Kianna, for giving us a realistic glimpse of the runaway slave’s physical AND emotional journey to freedom. My biggest complaint about Naomi was that she could’ve spent more time acting on her feelings about Jonathan instead of doing all that thinking about them. The same goes for Jonathan too!

Overall, I think this was a good early work of a developing talent. You will get a great sense of the historical setting with a nice dose of sexy time toward the end. I look forward to watching you grow as a writer.

Link to the publisher’s page for Freedom’s Embrace: http://www.ellorascave.com/freedom-s-embrace.html

Are you feeling inspired yet? Jump start your research with the following resources:
Anything written by William Loren Katz. He has 7 books about the African-Americans in the Old West. Here’s the link to his website and his booklist: http://williamlkatz.com/books/blackwest/