“We could not let little girls be killed…” – Diane Nash, SCLC 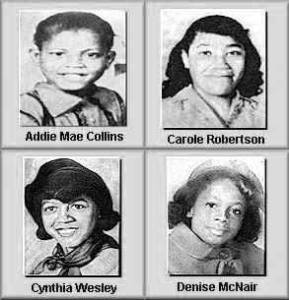 50 years ago today, on September 15, 1963 in Birmingham, Alabama, a bomb erupted outside of the 16th Street Baptist Church, killing four African-American girls who were in the basement bathroom preparing for the youth Sunday program. This event breathed new life into the Civil Rights movement and was the spark that ultimately led to the passage of the Voting Rights Act in 1965.

I take the time to write out their names because many have fallen into the habit of calling them “the four little girls.” For the longest time, I didn’t know who these young ladies were. I only knew that four little girls had been killed in a bombing. It wasn’t until I saw Spike Lee’s documentary “4 Little Girls” that I knew anything about their individual lives.

However, I’d like to see a fifth name attached to this significant event. This name I had not heard before today:

Sarah Collins. She was 12 years old. 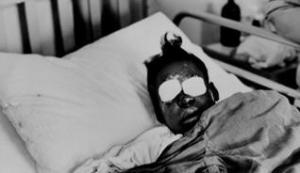 Who is Sarah Collins? She was the fifth girl who was in the bathroom that Sunday morning. She’s the one who survived. Intrigued? Here’s the link to her story: http://sarahcollinsproject.com/the-story-1.html#.UjYlN06Dnfw.twitter

I think it’s a shame that it has taken this long for Sarah Collins’s (now Sarah Collins Rudolph) part in the story to get any attention. Her omission from the dialogue reminds me of why I take the time to write about African-American women’s history each week. There’s a tendency to focus on the sad and unfortunate aspects of the history. I think it’s time to focus on the triumphs. Putting those triumphs into a romance novel is a good way to do that.